The official site for all Nocterna Books.

Over the last few weeks Zica Toys have revealed a couple of images to us regarding the Sectaurs and how they are going about rebooting the action figure line. The toys look brilliant and I shall certainly support the Kickstarter and the toy-line. This leads me to the main point of my post though. What about the Tigersharks?

Now I’m a great fan of the Tigersharks and I think it is a fantastic show (dare I say I prefer it to Thundercats) and I really, really want it to get a DVD release at the least. This however looks unlikely as I’m unsure if Warner Bros even know they own the rights to the show! I was thinking that my first port of call would be to contact them directly but I did hear of someone else on a forum who explained that he did ask them and they were not even aware of its existence. Still it can’t hurt to try a second time and I shall.

The other idea I had was to contact Zica Toys and see how they acquired the rights to produce Sectaur Toys. I saw that Skeleton Warriors had a brief reboot through Kickstarter too so maybe the people behind that would be a good place to contact too. Ultimately if we can’t get the full show then maybe we could get the action figure line rebooted through Kickstarter!

It’s all a question of rights and who owns what so if anyone could help me out or has any ideas that would be great! 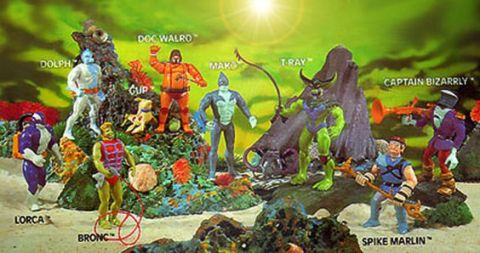